The View From the Top Row 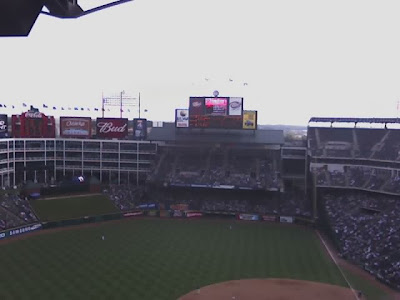 This is how it looked from our seats at Rangers Ballpark in Arlington this afternoon. The game itself wasn't so great--the Rangers lost to the Angels (again), 7-3, and the only scoring on Texas' part came in the bottom of the ninth--but the view wasn't bad from way up there, we were in the shade the entire time, and there was a really nice breeze blowing through for most of the game. And to top it all off, I got the very last dollar Drumstick in the upper level on "Ice Cream Sunday."

The Cowboys are playing in a few minutes, and football will eclipse baseball in the local consciousness pretty soon (if it hasn't done so already). But I'm already looking forward to the spring.

A Road more traveled: There's a lot of infrastructure improvement being made near the Ballpark (part of it in conjunction with the Three Bridges project that will help traffic get to the new Cowboys stadium that's being built down the street), and one of the things that I noticed was that Road to Six Flags now extends past the north part of the stadium, and in the process, it eliminated the cool tributes-in-concrete (to each season that the Rangers had played) on the now much-smaller sidewalk. (See a cool animated aerial view of the Three Bridges project here.)

But the funny thing is that, for the first time that I can remember, the western portion of Road to Six Flags actually goes to Six Flags! It had stopped at the ballpark in the past, and I always thought the name of that portion was fairly ironic before now. (Evidently, it was opened at the beginning of the season, but I'd entered the ballpark from the south during previous visits this year and hadn't seen the new construction until today.)
Posted by Kev at 6:10 PM
Email ThisBlogThis!Share to TwitterShare to FacebookShare to Pinterest
Labels: Baseball, Pictures