Reflections on a Most Unusual TMEA

The annual TMEA convention was virtual this year. Now that it's in the books (though the clinics are available for registrants through June) I offer a few random thoughts:

—First and foremost, I’m really glad that the convention was held, even if in a form that none of us could have imagined at this time last year. I still came away from it renewed and refreshed, a little bit more on fire to be better at bringing this wonderful art called music to the next generation.

—I was very impressed with the audio and video quality of the concerts and clinics; as some said in the comments, things were “TMEA quality.”. Despite the large number of people viewing some of these things, there was hardly any lag at all—certainly a lot less than during an average day of teaching lessons.

—I liked the comment box that was available during all the events.  Everyone followed the instructions to keep things positive (at least in the events that I attended), and it was cool to watch the names fly by:  Friends I might have seen if I’d been there in person, past TMEA officers, legendary educators in the state, etc. One of the best moments was, during a piece by a composer with whose work I was familiar, seeing the composer herself pop on and compliment the performance.

—Despite the major hit that this obviously gave to the San Antonio economy, it was probably a blessing that we weren’t down there in person this year. It was in the 30s down there most of the weekend (which would have put a major damper on outside dining on the Riverwalk), and imagine everyone trying to travel back today (or last night for me, if I’d had All-Staters).

—It was great to be able to see any concert whenever you wanted,  from their original air times through the convention’s closing last night. I was able to see the things I missed on Thursday night while teaching, as well as some concerts that ran concurrently with other ones I was watching at their regular times. I got to see several things I wouldn’t normally see, most notably the orchestras (the invited middle and high school groups, as well as the Houston Symphony, whom I hadn’t seen since I was a kid).

—I do wish there was some way that the All-State groups could have been able to collaborate on something, even if it was a single piece in one of those stitched-together video performances. But with Area being just over a month ago, that might have been a tall order to distribute, learn and record the music, and someone would have had a few sleepless nights compiling the video.

—Even though the concerts and clinics were inspiring, the one thing I really missed was, of course, the people. There are friends I only see once a year (often at the exact same place each time, completely randomly). I missed the fellowship of the UNT reunion (even the crazy elevator ride), and the many other encounters along the way, (It’s funny to see the faces of my All-Staters when I run into maybe 10 people I know before we even get to the convention center to pick up our badges.)

—And of course I miss the food: Casa Rio, The Original, Paesano’s, and County Line BBQ. And I miss staying in the Drury Plaza Riverwalk,  located in a historic old bank building from 1929.

I leave you with two pictures of things that gave me joy this weekend:  Friday night, when we did a very stripped down, virtual version of the annual Sinfonia Sing, and yesterday evening, watching a middle school band that went to great lengths to include the virtual students in their concert.   May we all be together again in 2022! 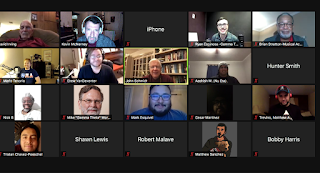 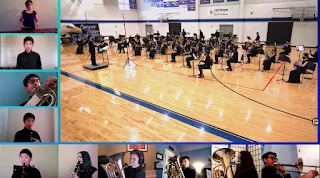