I don't get up to visit my alma mater, UNT, nearly as much as I used to a few years ago, but I've been there enough to be aware that the Concert Hall--the major performance venue of the College of Music until the opening of the Murchison Performing Arts Center in 1999, and a hall that was, until now, virtually unchanged since the opening of the older portion of the Music Building in 1960--was undergoing a massive renovation, and I also knew that it was about to have a "soft" opening in the next few weeks. But until today, I had no idea that it would be this beautiful: 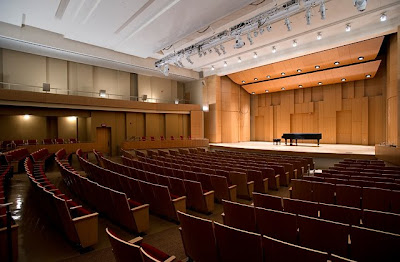 Nor did I know that it was being named after a major Denton figure whose name is known to virtually everyone in town. Here's the skinny:

A redesigned concert hall in the University of North Texas Music Building will be unveiled this fall, after a $6.4 million renovation project to create a more intimate performance space, enhance the acoustics and install state-of-the-art equipment.

"We are thrilled with this transformation of a tired, worn-out and dated hall into a beautiful and acoustically splendid space that will serve our students and faculty for their many performances of solo and small ensemble music," said UNT College of Music Dean James C. Scott. "There is no doubt that Voertman Hall will house more of our performances than any other College of Music space."

The Concert Hall was always something of a white elephant when I was in school; the design was plain, the seats were bulky metal with worn cushions (and they creaked when the seat bottoms went up and down), and it was starting to show its age (I'll never forget when a large fluorescent light bulb just fell out of its socket and crashed onto the back of a [thankfully unoccupied] seat a few rows away from me during a recital). It was too big for most recitals (it seemed cavernous whenever it was less than half full), and it was almost too small for the large ensemble concerts. It was definitely due for a makeover, and it looks like those involved have outdone themselves with this effort.

As Dean Scott noted above, this venue should be the perfect complement to the 250-seat Recital Hall (also in the Music Building) and the 1,025-seat Winspear Performance Hall in the Murchison Center. I'm looking forward to seeing this venue in person very soon, and when I do, I'll pass along my thoughts (and an actual picture or two).
Posted by Kev at 11:31 AM
Email ThisBlogThis!Share to TwitterShare to FacebookShare to Pinterest
Labels: Music, News, UNT