Walking in a Spring Break Wonderland

I knew that it was supposed to get colder this weekend and maybe even rain yesterday, but the idea that there might be snow this weekend was unknown to me until a friend complained that his outdoor gig got postponed yesterday because of the possibility of the white stuff. But it's easy to be a weather skeptic here in North Texas, thanks to years upon years of screaming headlines on the ten o'clock news about the upcoming ARCTIC BLAST! that rarely, if ever, pan out the next morning.

I did see some precipitation that could be called a flurry-raindrop hybrid during yesterday afternoon's errands, and by the time we went to a late dinner last night, there was quite a bit of blowing snow, though the forecast seemed to have the heavier stuff to the north and west of the Metroplex. The roof was covered when I got home last night, but everything was supposed to stop by this morning, when the winter weather advisory was set to expire.

So imagine my surprise when I woke up to this: 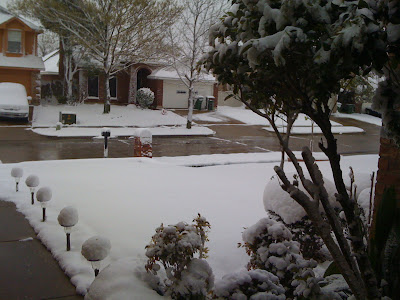 (I love how the landscape lights look like giant mushrooms...)

So it turns out that Chicago wasn't my only snow experience in the Winter of '10 after all; I had been bummed when I missed the mini-blizzard here last month while I was away at TMEA, but who knew that winter would make an unauthorized trip across the border of spring (which started yesterday at 12:32 in the afternoon).

And now they're saying that there's a 50/50 shot of more snow throughout the entire day. But it won't quite hit freezing tonight, so there's little if any chance of spring break being extended by an extra day (which would be made up in a few weeks, on The Holiday That Schools Aren't Allowed to Call Good Friday Anymore). And to top that off, tomorrow's high is supposed to be 60. Gotta love our Texas weather...
Posted by Kev at 9:42 AM
Email ThisBlogThis!Share to TwitterShare to FacebookShare to Pinterest
Labels: Texas Weather