More Than Just a Place to Lay Your Head

I've been hinting ever since the first full day of TMEA that I would say a few words about the new hotel where I got to stay this time. (And yes, "new" is relative, because it has been a hotel for almost two years now, and the building itself is 80 years old!) I was quite pleased with virtually every aspect of the Drury Plaza Hotel Riverwalk in downtown San Antonio.

The edifice in which it's housed has a storied history, starting in 1929 as the Alamo National Bank Building, and housing a succession of other banks later on. A few years ago, the city issued bonds to redevelop the building into a hotel, and Drury added a special element to the proceedings: The company paid several million dollars to extend the facility to the Riverwalk, completing its circle in the process:

While the River Walk's eight million visitors a year don't seem to mind its horseshoe shape, the design forces them to double back at both ends, adding to the congestion problems there. To ease the traffic, Drury Southwest, Inc., a development company based in San Antonio, TX and Cape Girardeau, Mo., has designed and paid for a $3 million tunnel project at the River Channel area which will add 850 feet of walkway to connect the two ends of the River Walk and create a full circle. A gift to the City of San Antonio, the walkway completion will, not surprisingly, run right in front of the new Drury Plaza Hotel. (Source: San Antonio Business Journal)

During the renovation, great pains were taken to retain the grandeur of the building's history as a bank. Looking out over the lobby, it's not hard to imagine that former incarnation: 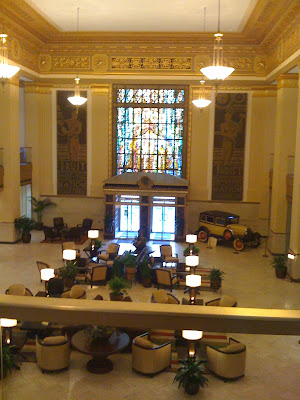 Notice the cool 1930 Ford in the right-hand corner; if car models back then came out a few months before the calendar year like they do now, the car and the building are almost exactly the same age.

Even the check-in area has been made to look a lot like the old bank-teller windows. And in the basement, which now leads to the Riverwalk, there are plenty of old photographs on the wall that chronicle the building's bank days; among the most amusing are those of the "drive-up teller" who actually walked out to your car and the IBM computer that printed out the bank's annual reports (it's as big as a refrigerator and probably had less storage space as an iPod nano). But the biggest nod of all to the building's history has to be this: 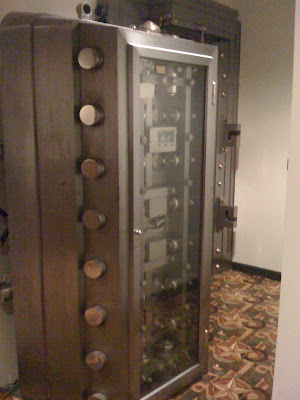 Drury has added some other great amenities to the hotel; not only is there an observation deck on the 22nd floor (from which this picture was taken), but there's a swimming pool up there as well, and the famous spire atop the building (which signaled weather conditions back in the day) lights up once again.

As far as the hotel part goes, I couldn't have been happier; my room was in a corner, which meant that it had six (!) windows (whose curtains I had to remember to close every night to avoid an overabundance of morning sunlight) and almost an L-shaped layout; after coming in the room, it was necessary to make a big right turn to get past the closet/bathroom portion to the sleeping area; this gave the room an additional grandness of scale that's not usually found in places where I stay. The beds were extremely comfortable, the flat-screen plasma TV was great, and the breakfast--like at all Drury hotels--was abundant and free (but this one was served in a giant mezzanine area looking down on the lobby). The hotel staff was professional and courteous--some of the best I've run across; they even tended to smile more, as if to say that this is as great of a place to work as it is to stay.

You might be thinking, "C'mon, Kev, surely there has to be something that wasn't ideal!" Well, OK; the walk down Commerce Street was a little dicey at times, though it's been that way--at least west of Losoya--for a while now. (The Market Street side was a bit friendlier, what with all the new hotels such as the Westin, Hotel Contessa, and Homewood Suites on that street.) But with the Riverwalk extension in place, there's now a good alternative to the streets; the river is well-patrolled and much freer of questionable characters, and it's great exercise to take the long way to the Convention Center.

I got a convention rate for this hotel, so it's probably more expensive to Joe Average Traveler, but it compares favorably to other nearby properties. If I were going to TMEA on my own dime, I would definitely consider this as a prime option.
Posted by Kev at 9:43 PM
Email ThisBlogThis!Share to TwitterShare to FacebookShare to Pinterest
Labels: Architecture, Travel