I knew this day was coming, but I was hoping it could be put off for a long time: My cat, Tasha, had to be put down today. She was sixteen years old and not in good health at all; she'd been losing weight for quite some time, despite having a ravenous appetite. Still, she had continued to be her old self until about a month ago, when she just withdrew from the world, for the most part. She stopped being interactive, and it looked like it even hurt her to get petted. (We won't even mention the fact that she used the entire house as her litterbox lately.) Mom had been agonizing over the decision all night last night, but after she witnessed Tasha have a seizure this afternoon (and the results, which included her food bowls being strewn around the kitchen, made me realize that they'd been happening for a few weeks without my seeing them) pretty much sealed the deal; there wasn't really anything that could be done for a cat that old and that sick.

Usually, a tribute such as this one would go on about what a loving, loyal and joyful pet the dearly departed was. However, saying that about Tasha would be a pretty liberal stretching of the truth (and would elicit howls of laughter from anyone in my family). She was not really a "people cat" at all, though we found a bond over the years. She couldn't stand to be held (until quite recently), she would only let herself be petted down to the middle of her back, where the line of licked-off fur started (that's Fun Facts #10 if you're playing along at home), and sometimes she'd just take a disliking to someone and would hiss at them for the severe infraction of...looking at her. Yet somehow, she managed to claim a little piece of my heart in the process.

Tasha started out as a stray; she "adopted" my sister, whose then-boyfriend lived on the property of a bunch of horse stables, at the end of college. For her first year, Tasha was a normal cat, but something happened after that which made her turn more psycho as the years went on: the hissing, refusal to be held, and so on. (We used to joke that perhaps she'd gotten kicked in the head by one of the horses at the stables as a kitten. However, last summer, the sister of a student of mine took a look at her and noticed that her two eyes were slightly different shapes; evidently this is indeed a sign of previous head trauma. Who knew?)

When my sister was in grad school, she had a female roommate with a female cat of her own, and we figured that, while the girls were gone, the two cats just got together and formed their own Man-Haters' Club of sorts. (There was a time when my dad became a regular victim of the getting-hissed-at-for-looking-at-her thing.) When my sister was out of town, my parents might cat-sit for a week, and Tasha would hide under the bed for the entire first day. A socialite she wasn't.

Five summers ago, I was given the job of cat-sitting as my sister and her family were in the process of moving to Austin; she had the tendency to bolt out an open door at first opportunity, and they didn't want that to happen when the Realtors were showing the house. After that, well...the sitting job became permanent. There were already two adults, a baby and two Sheltie dogs in their house, and Tasha always did better as an "only pet." Suddenly, my household grew by one; she followed me from the rental house over to Casa de Kev, where tonight will be my first night without her.

She definitely had her quirks: Licking all the fur off her stomach, coming to me when I whistled "Joy Spring" (but only in the right key), and her recent habit of standing atop the saxophone case of every student who came in here--to show them whose territory they were entering, of course. She also had this thing with switching her sleeping place on an almost weekly basis--on top of my CD racks, on top of my laundry basket, on top of the TV, on top of me in my bed; in the final days, it was behind the dryer. It didn't matter how much it might have inconvenienced me--she was going to sleep where she felt like it, and that was that.

But still, despite her sour nature, we bonded. Sure, the first day she came to my old house, she hid under the bed all day. But she realized pretty quickly that I was the Dude With the Food, and I was OK in her book from then on. She even showed affection at times; sure, it was always on her terms, but she let herself be petted, sat on my lap (usually while I was on the computer; there were plenty of times when I had to apologize for an instant message saying something like "hfjaskjgkl" by saying "sorry, cat typing again") and waited for me to come home every day.

She was also the master (mistress?) of stealth. I remember several times when my sister owned her and we thought she'd gotten lost; one time, at a gas stop, we thought she'd bolted out the door despite my opening it ever-so-slightly; it turns out that she'd been hiding underneath the passenger seat the whole time. On another occasion, I was getting the living room furniture from my sister's old apartment (she was getting new stuff when she got married) and we thought Tasha had escaped as we brought the sofa out the door. My friend and I looked for her around the complex for at least half an hour, only to find out that she was sitting on top of a cabinet in the upstairs bathroom. When she lived here, she'd try to go out the front door whenever I answered it, but as I found out one time, when the door was accidentally left unlocked and later blew open, she did in fact have a homing instinct, as she came right back in (chronicled here). I guess she knew where the food was coming from and decided to stay there.

I couldn't bear to go to the vet with Mom and Dad today; Mom's done this for a previous cat and a dog, so I stayed home and remembered the past five years. This house feels pretty empty right now; sure, it's cleaner than it's been in years, but it's not the same. I already thought I heard her meowing tonight, but I'm at least relieved that she's not suffering anymore.

Of all the animals that are out there, it's amazing how a select few species can come into our lives and be like famliy. We give them food and shelter, and whatever they give us back, whether it's love and affection or mostly indifference and occasional acknowledgement, it's always hard to let them go.

Today, I raise my glass (OK, it's late, so it's really a Dasani bottle; you get the idea) to Tasha. If there's a special corner of heaven reserved for pets, I hope you're having fun finding weird places to sleep as the jazz angels play "Joy Spring" on their harps. And tell Zip, Sinbad, Mr. P.C. and Sassy that I said hi.

I have a picture of Tasha sleeping in a funny place; I'll post it here once I get my digital camera software figured out on this new computer. 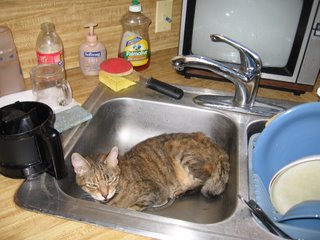 I've also submitted it to a most-appropriate website, catsinsinks.com. May she live on via the Web...
Posted by Kev at 1:58 AM
Email ThisBlogThis!Share to TwitterShare to FacebookShare to Pinterest

I'm sorry for your loss, Kev. Tasha was obviously a special one, to have touched you so deeply despite her many quirks. Keep the good times you enjoyed with her in your heart.

Kev-
As someone who, until two years ago, was never really that attached to pets, you have my sympathy. Sometimes pets are the only family you have when everybody else is far away.

What a wonderful tribute to your cat. You have my deepest sympathies.

We had to put our 17 year old cancer patient down recently too. It was devastating. She was doing so well...we celebrated every sign of good health...and then over the course of about 36 hour hours she took a dramatic downward turn. There was nothing left for us to do. We miss her so much it physically hurts.

She had a challenging personality at times too...it just made us love her that much more.